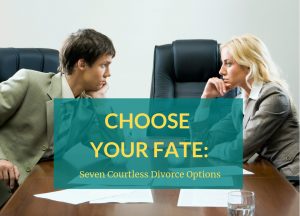 Historically, a prenuptial agreement was a written contract entered into by a couple before they married to determine how ownership of their respective assets would be decided should their marriage later fail. It can also protect the inheritance rights of children and grandchildren from a previous marriage. It can protect a party’s business or professional practice so that it is not divided and subject to the control or involvement of the other spouse upon their divorce. It can protect the debt-free spouse from having to assume the obligations of the other.

Nowadays, if a spouse plans to give up a lucrative career once married, a premarital agreement can ensure that s/he will be compensated for that sacrifice in the event that the marriage does not last. It can cover any of the details of decision-making and responsibility sharing to which the spouses want to agree in advance. It can limit the amount of support that one spouse might pay to the other upon their eventual divorce. It can protect the financial interests of older persons, persons who are entering into second or subsequent marriages, and persons with substantial wealth.

Finally, today, prenuptial agreements include anything that the couple wants formalized in writing, so long as it is not illegal. For example, a growing number of couples now include social media clauses in their prenuptial agreements to protect them from each other’s wrath in the event of their divorce, agreements that the spouse won’t post photos shared during their marriage on Instagram or personal information on Facebook.

A postnuptial agreement is a written agreement executed after a couple is married. Although this device historically was intended to settle the couple’s affairs and assets in the event of their divorce, it has become commonplace for couples also dealing with financial, legal, and emotional issues within the marriage, with no thought of divorce, just dealing with life’s traumatic issues and memorializing how they agree to deal with them in the future.

Most divorces end when the parties enter into a marital settlement agreement that is entered by the court into a final judgment of divorce. A full post-nuptial agreement may include resolution of timesharing, parental responsibility, equitable distribution, alimony, child support, and attorney fees. Even if a divorcing couple is unable to agree on all of these matters, they may enter into partial agreements regarding the issues on which they can agree. Only the remaining issues are then tried in court.

While postnuptial agreements are most often used when a couple is divorcing, happy couples may also enter into them after they are married but before any issues arise so that, in case they do decide to end their marriage one day, they already know what will happen.